De-Exit: Eternal Matters interview: 3D platformers, getting the word out, and development challenges

At Gamescom this year, one of the games that caught my interest in the Indie Arena was a little known 3D platformer by Sandbloom Studio. With a voxel art aesthetic that also incorporates action adventure elements, De-Exit: Eternal Matters reminds me of earlier 3D platformers like Mario 64 and Beyond Good And Evil. And even though the game won’t be out for a while, it’s already caught the attention of HandyGames – who operate under the umbrella of THQ Nordic and who’ll be looking to promote the game to as many people as possible.

To find out more about De-Exit: Eternal Matters, I spoke with Julien Gatumel (Head of Communication and 3D Artist, Sandbloom Studio), Gabriel Jiménez (Creative Director and Artist, Sandbloom Studio), and Thomas Zinnecker (Social Communication, HandyGames), and got to ask them as to how their game fits inside the 3D platforming space, how they’re going to market their game, and what challenges they’ve experienced during the game’s development. Enjoy!

For people that don’t know much about De-Exit: Eternal Matters, how would you describe the game, and what would you say is unique about the game in comparison to other games out there that are of a similar genre?

Julien Gatumel: The main differentiator is the mix of a very simple voxel art style that’s very cubic, but contrasting it with a lot of big cinematic epics. Also with techniques that are used in more realistic games like shaders and volumetric lighting, and all the animations are made with motion captures as well. So it is the contrast between the cinematic and the minimalistic that really sets our game apart.

There was a time when 3D platformers like Mario 64 were really big and were mainstream AAA productions. Why do you think the genre has gone away in terms of popularity to the extent that the only people that really dabble in the genre now are basically indie developers?

Julien Gatumel: I imagine it’s because it has been done a lot. Mario 64 for example, kind of invented everything, and you cannot innovate a lot with the limitations that you can have in the AAA space where you can be totally original or be really niche. So what indie allows is the possibility to target a smaller demographic that looks for those types of games, and you can be a little bit more creative and out of the box, I would say. So I’d say the popularity of those 3D platformers is because they are a little more different and they can’t be explored in AAA.

One of the problems that all of these 3D platformers have is the camera angle. Especially when it comes to the idea of exploration, what difficulties did you have in getting the camera angle right to the extent that not only does it allow people to be able to see what they’re doing, but it also allows for the game to be fun?

Julien Gatumel: So this is a big challenge, as you say, and a challenge we enjoyed in some parts because we mixed two kinds of cameras. The free camera that we use for most of the game, and we did a lot to polish on that. For example, objects that come between the camera and the player become invisible in order to help the player. If the object is very big, for example a cave or something, the camera will automatically get closer automatically, but with a smooth transition and not bother the player too much. And then in specific places where the free camera would be too bothersome, we’ve put static cameras. Also, it’s kind of the idea of the cinematic graphic aspect of the game. Some rooms have a static camera to give this cinematic aspect, or in some places where you have to crouch through a tunnel, the camera becomes like it’s following from behind the shoulder to give this variety as well, to make it fun.

The art style… You said that the game has voxel graphics, and it also has this blocky art style. What influenced your decision to go for the blocky art style in comparison to say, something else?

Julien Gatumel: So at the beginning it was only Gabriel making the game, who had the base idea, and who had the spark that initiated it all. And he wanted to explore and was able to work with that kind of art. When we met him, we saw it and we said, “we don’t need to change the art style to make it a big game. It is already looking very good. We just need to add more professional lighting, have integrated better animation that’s fluid”. So we decided to follow his lead because it was more simple for him to do it alone. We decided that it’s not only simple, but it would also really does look good if we put care into it.

You said that Gabriel Jimenez started out the game by himself. How big has the team expanded to at its peak?

Julien Gatumel: For most of the development time, it’s been 10 people.

Where are you people located? Where do you come from?

Julien Gatumel: And the rest of the team is from Barcelona.

Thomas Zinnecker… Some people have argued that gaming conventions have ceased relevance in the age of the Internet. But as someone who discovered you via Gamescom, I personally think that these gaming conventions are a great marketing tool. But with that being said, what marketing techniques have you used to get the word out there, and also have the right kind of gamers find your game?

Thomas Zinnecker: I think it’s nice to see how the people react to the game. And yeah, we have received wish-lists and stuff, but to see how people play and enjoy the game, I think it’s special for the developers to see what they can improve in their game. Because we are still in the stage where we can improve stuff. And when people react to the game and you see how they enjoy it, then you know that you are on the right track. 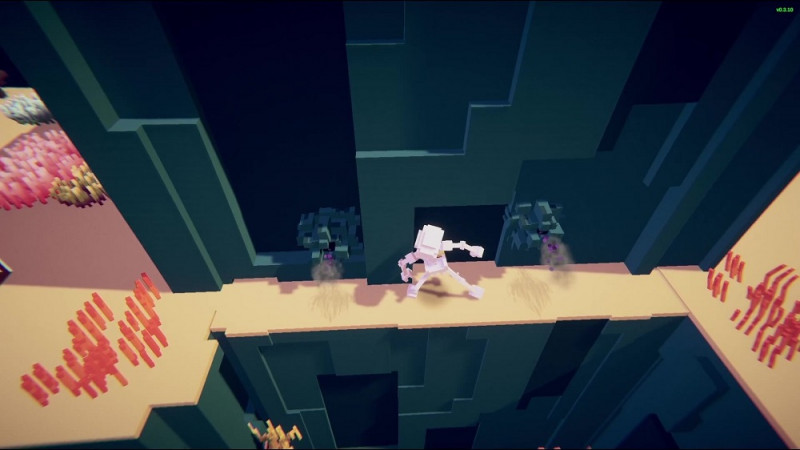 When is the game out?

Julien Gatumel: We don’t have a release date yet, but the idea is soon.

Julien Gatumel: We can’t say 2022. We are not fans of putting out release dates then having to cancel them. So we just say “soon” and hope that we don’t have to delay the game.

Gabriel… you worked on the game by yourself in the beginning, but now you’re leading a team of around 10 people. How hard was it for you to go hands-off on your baby, to the extent that you were able to trust other people with your creation? At the same time, what difficulties have you had in translating your vision to other people and getting them to realize what was in your head in the first place?

Gabriel Jimenez: When we start working together the first thing I said was, “this is now not my game, this is our game”. So I decided to delegate some roles to different people because I can’t take care of everything. So it’s hard in the sense that I can’t control everything alone, I need more control over the game itself. But the people in the team are doing good work and I’m happy with the results. People now are playing the demo and really like it, so I’m happy with that.

What would you say have been the biggest challenges that you guys have faced as indie developers to get to this level? What have you learned from that, and what do you think the biggest challenge will be from here until the game’s end release, and how will you overcome it?

Julien Gatumel: I think the biggest challenge was to get ourselves out there. Because we had the idea to make De-Exit before, but we didn’t have any experience. So it was difficult to convince a publisher. So we self-published this game called Emma: Lost In Memories and have it out there. And after that, we were able to be more credible and show that we had experience, and we were able to sign a deal with HandyGames so they could help us. That was the most difficult part. But it’s very cool to see the people play it here. So I guess the harder thing now is to be able to show the game to as many people in the world as possible, and I’m very excited for that, because I think the game is very good. We just need to convince the public of that.

Julien Gatumel: If you like the game wish-list De-Exit on Steam or on other platforms when it’s available. We will be available on PC, XBox, PlayStation, and Switch. Look for it in the near future.