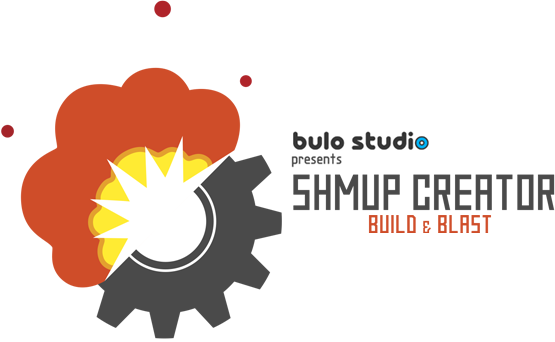 During the days of the Amiga and Atari ST, we had a little game creation engine called Shoot-‘Em-Up Construction Kit (a.k.a. SEUCK). Created by Sensible Software, SEUCK allowed users to make simple shoot ’em ups by enabling them to draw sprites and edit attack patterns. Since then, we’ve had a few game creation engines that have specialized in creating shmups – most notably the Shoot ‘Em Up Kit.

Now, French developer Bulo Studios has stepped up by releasing their SHMUP Creator engine. Developed over many years by Adrien Jabert (Technical Artist) and Mathilde Soussi (Art Director), the engine promises to allow people to create shmups without any coding ability. These shmups can be 2D or 3D games, including vertical and horizontal shooters. At the same time, shmup creators can also export their games as a stand-alone Windows .exe file.

I was able to interview Adrien Jabert who was kind enough to answer my questions, and also let me know as to what shmup creators can expect from his shmup creation engine over the next few months. Enjoy!

Can you tell us a little bit about Bulo Studio? How did the studio form, and long have you been established for? What other titles have you released prior to SHMUP Creator?

Bulo Studio was only formed to work on the SHMUP Creator. Before that, we worked for several other game companies over the year. I worked on an Amiga game a long time ago, at Quantic Dreams, Ubisoft…

How long has SHMUP Creator been in development for, and what was the original impetus that made you want to embark on such a project? What difficulties did you encounter during the development cycle, and how did you resolve these issues?

There was no “I will make a shmup maker” moment in the beginning. I started to write a small bullet engine in C++, then I added a UI to play with it and create patterns, then bullets without enemies were no fun so I added enemies… Until one day it was obvious that I was coding a shmup maker and we started to think: “hey, maybe it would be cool to make a modern Shoot-‘Em-Up Construction Kit“.

The development was very long because we have day jobs. The tiny size of the shmup market prevents us from leaving our jobs to focus exclusively on this product. So, that’s the most difficult thing: keeping the energy and motivation to work for several years on a complex project, part-time.

The other difficult part of the development is: making a tool is very, very hard. There are tons of features, and each feature has to work with other features. We never know what users will do with the tool, but we know it will probably be some crazy thing that we never thought of. It’s very hard to test every combination. SHMUP Creator is not a game, it’s several shmup engines plus a tool.

How does SHMUP Creator compare with other “drag and drop” game making tools – like Game Maker? What is it about SHMUP Creator that will make it stand out for shmup creators, and is the engine versatile enough to allow developers to make games that don’t belong in the shmup genre?

SHMUP Creator is really designed to make shmups. That’s the core idea: give a designer all the tools they need to focus on gameplay rather than to learn how to code. We have users who learned coding with Game Maker and are still happier with the SHMUP Creator because they can go crazy with ideas and not have to stop and code them. Others have tried to learn to code, and it was too much effort and took too much time. Most users don’t want to code at all, they just want to create and make a game. So we offer an optimized bullet engine, where most shmup gameplay features are already implemented, including a visual bullet pattern editor. But the best thing with the tool (for me) is that you can do something, press a button and immediately test it, think “ok, that’s good but the timing is a little bit off”, move the enemy slightly to the left, test it again, etc. The creative process is very fast and intuitive and every tool is made with this “shoot ’em up” in mind.

Even though Game Maker has a “drag and drop” mechanic, it also has it own inbuilt scripting language that allows game developers to utilise more complex behaviours. Will SHMUP Creator come to adopt similar scripting features that will allow game developers to create shmup games that are increasingly more complex? In short, can SHMUP Creator be used to create original shmups that are highly professional commercial products?

This is our goal. Right now people can make professional games with the SHMUP Creator. But it’s a closed engine, and not everything is possible. My dream is to add a kind of graphical scripting tool to allow the creation of more custom gameplay and scoring techniques. I can’t say if this will happen or not, it depends on the success of this product in the long term. But I’m sure games made with our tool will be released on Steam as soon as this year.

What do you think makes a good shmup, and what advice would you give to someone who is looking to create a shmup that would appeal to your gaming sensibilities?

But in general, my idea is that timing and rhythm are really important in a shmup and I think the SHMUP Creator gives all the tools to work on that and iterate quickly.

Although SHMUP Creator has only been out on the market for 2 months, have there been any games that have been created with SHMUP Creator that have caught your interest? What do you think this bodes for the product, and what are you hoping for shmup creators to achieve as they become increasingly more familiar with the product?

To be honest I was really, really surprised by what some users did only two weeks after the release. Kanzaki, a Japanese super player, created an incredible Doujin game 2 weeks after buying the engine. Some people created almost full games after only a few weeks. That’s a testament to the fact that making a game with our tool is fast and easy. Also, I was surprised by the range of gameplay and art styles. One user is doing a game with playdough, some are creating beautiful pixel art levels, some are making a game with voxels… That makes us happy, looking at all that creativity!

What are your top 3 shmups of all time that you’d recommend to others? What do you like about these games?

Nemesis II, which is an old Gradius for MSX computer, was the first shmup I ever played. And it was also the most professional and impressive game for me at the time. I think I was blown away and I actually broke my computer space bar playing it.

Gradius V is beautiful. It’s too long, and there are too many great ideas if that’s possible, but it’s still one of the best-looking shmup even today. Impressive work.

Under Defeat. I love the mood. It’s slow, it’s sad, the world feels solid, and the explosions feel real.

Finally, I understand that there are a number of updates planned for SHMUP Creator. Can you tell us a little bit about what the roadmap is for the product, and whether you have any plans for allowing developers to export their game projects to other platforms (ie Sony, Nintendo, Microsoft)? At the same time, and aside from wanting to take the time to add more features, what are Bulo Studio’s future plans?

We are listening to users, and they give us a lot of really precise and insightful suggestions. We’ve added Focus mode, and are working on new sound features – like pitch variation and sound encryption. We’ll add a lot of small gameplay features in the next few months as well as more menu and HUD customizations.

The idea is to continue to improve the SHMUP Creator over time. Adding those features is taking all our time, so this is also our future plan: continue to make our tool better and help people have fun and create great games.