With E3 being cancelled this year, there’s been a lot of talk on whether big consumer and industry events (like E3 and Gamescom) are even necessary in an age in which people predominantly consume videogame news and media online (especially after Covid 19). However, whilst there’s been a lot of doom mongering from armchair critics (who never venture out anyway), it could be argued however that events like E3 and Gamescom play a crucial role in bringing passionate gamers together, and also increasing the visibility of games that would otherwise be overlooked in an increasingly congested market. Certainly, this proved to be the case with Dyschronia: Chronos Alternate – a VR adventure game (in the same vein as mystery crime thrillers like Phoenix Wright and Danganronpa) that I only just discovered at Gamescom this year, and which is being developed by indie Japanese developers MyDearest and IzanagiGames.

Coming out for the Meta Quest 2 on 22nd September, and later to be ported to the Nintendo Switch early next year, I wanted to find out a little bit more about Dyschronia: Chronos Alternate, and spoke to Alberto Morena (Head of Overseas Marketing) about the title, and why indie Japanese games don’t receive a lot of mainstream attention in the Western gaming market. Enjoy!

Alberto, this is a question that’s geared more towards your industry speciality… So you’re in charge of overseas marketing. The game is Japanese, but we’re based in Gamescom at the moment. So the question is: in what ways do you think Gamescom has benefitted the marketing of Dyschronia as a Japanese production?

Because the game is a Japanese game, it’s easier for us to reach out to the Japanese public. We can contact Japanese users, meet them in person, or have them at our offices. But we can’t take that approach with other countries. So Gamescom offers us an opportunity to meet fans of the game, as well as people who could become fans of the game. We can get some feedback from players from all over Europe, even players from the States. So Gamescom is a really good way to connect with the user and player base.

Do you think exhibition events and conferences like Gamescom and E3 still have a place in the internet age?

Yeah, absolutely. I remember going to an event that was held in VR, and that was nice. I mean the technology, the avatars and all that stuff was nice. But at the end of the day, you need human thoughts. You need the players to just play the game and give you feedback, their ideas, and how they feel. It feels like you need a human relationship, where you’re talking with other people. That very real touch. So yeah, they have a place.

Because there are no VR games like this one right now. Most VR games are based on a gimmick. Just one gimmick. This game is based on a story and on characters. It has a really nice setting that’s made by great creators from other companies – like, Sega, Square Enix, Capcom. The big names in Japan. So we have gathered the biggest talent in Japan to make this VR sci-fi adventure.

How big is the team that’s working on Dyschronia?

Now, I saw the game in the indie section. 60-odd is still regarded from yours and Gamescom’s perspective as an indie title. At the same time, Dyschronia is a VR game. Do you need the VR headset in order to play the game? Or can you play without VR?

Okay, so the other part of my question would have been: given like the size of the team, do you think maybe the VR market is too small?

It’s getting bigger. It’s fine because we actually started with something like 20 people on the team. The game kept getting bigger and bigger because we wanted to make the game bigger and bigger. So right now we’re at around 55 to 60 people, but the VR market we believe is getting bigger. We just checked the number of headsets that the Meta has sold and can see that there’s a huge player base. And you can see that there are multiplayer games, and that’s because there’s a huge player base right now.

You said that the game is coming to the Nintendo Switch. Is the game coming out on other consoles like the PlayStation 5, PlayStation 4, XBox etc? 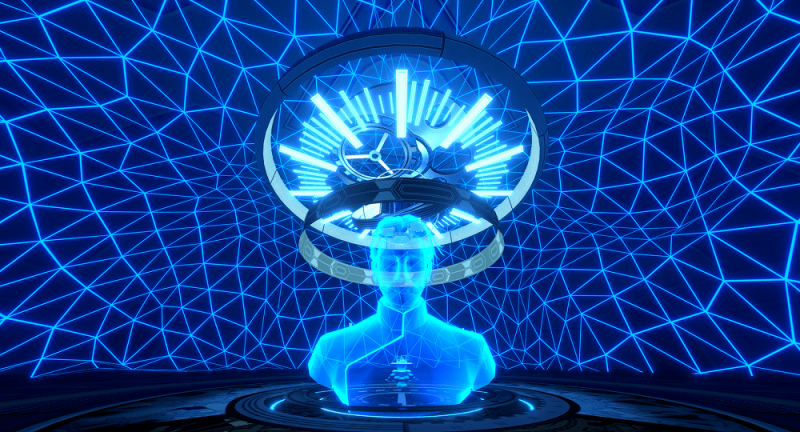 You said that a lot of the the team members come from established companies like Sega and Square Enix. How did the team grow from its humble origins to where it is now?

So the director wanted to add something to the game, but it couldn’t be possible with the actual team. So in something like two weeks… less than a month… we looked for the best people in that field who were working for other companies, and we just headhunted them.

This kind of goes back to the history of the entire games industry as a whole. You mentioned companies like Sega and Square Enix which have always been around, and which are still extremely established in the Japanese and global games industry. But I’m finding that even though you have all these established Japanese companies like Square Enix, Sega, Nintendo, Sony… I’m finding that there aren’t that many indie Japanese games that are breaking through. Obviously, Dyschronia is attempting to be one of those titles. But for a country with such a rich gaming heritage and development pedigree that’s world class, why do you think – and especially as someone who’s head of overseas marketing – why do you think Japanese games in this day and age… given the fact that during the Super Nintendo and 32 bit era, all the best games came from Japan. Why do you think in recent years, it’s now gone the other way around? You would think that with a lot of the indie games which have only really been possible as a result of the internet, which has made the distribution of games to be so effortless, and where Japanese games are literally a button click away… why do you think it’s so much more harder for indie Japanese games to get the word out, and to have their games in the public eye, in comparison to Western indie creators?

I mean, when you talk about Nintendo games and the Super Famicom, you have to remember that teams at the time were like five or seven people. Nowadays, we would consider them to be indie creators. And the games which Nintendo and Square Enix are making right now are made by huge teams.

So there are indie creators in Japan. There are many, many indie creators in Japan. But the language barrier is a huge issue. In Japan, they create titles in Japanese for the Japanese market. But they don’t know how to bring those titles to other audiences. And it’s not so easy nowadays when you have to find a publisher. If you are only one person, that’s hard. And if you don’t speak English, that’s harder. So if you create a game in Japanese, then it stays in the Japanese market. So there are indie Japanese creators, but they don’t have the know how on how to publish their games in other countries.

Okay. When’s the game out?

Episode One is going to be out on September 22 for Meta Quest 2. Episode Two will be out winter. We are working on it right now, and it will be out two or three months after Episode One. Then Episode Three…

How many episodes are there going to be?

Three. You can divide it, where in Episode One, it’s like the beginning of the big adventure. Then in Episode Two, you have all the action…

I don’t think I have anything more to say… Any last words?

Yeah, I’m glad I came to Gamescom. Meeting all the amazing people is really nice.

That’s good. Thank you so much.