Interview with Choi Ji-Won of Lies Of P

With Soulslike games gaining mainstream popularity in recent years, one game that’s stood out for me in recent months is Lies of P – a faster paced hack and slash style game that’s reminiscent of Bloodborne and which sees you controlling Pinocchio as the main character.

Even though Pinocchio is often associated with the light-hearted Disney movie, like American McGee previously did with his Alice game, developer Round8 and publisher Neowiz have decided to offer up a much darker take on the puppet and its fantasy world.

I was able to speak to Choi Ji-Won (Director) about his game, and even though Lies of P isn’t coming out until next year, I was able to ask him as to how he intends for the Neowiz published game to stand out in the increasingly crowded Soulslike genre. Enjoy!

How long has the game been in development for, and when will it be released?

I really like the fast paced combat. I don’t mean this as an unfair comparison, but it reminds me of Bloodborne. In terms of Soulslike games, those are the type of games that I like, because they remind me of fast paced hack and slash games like Devil May Cry and Bayonetta. With that said, what inspired the Steampunk and Victorian style setting where you’re going up against puppets?

I just want to say that this is not Victorian at all, which is very well used for the Soulslike genre. This is a completely different background, which is the Belle Epoque era in the 19th century in France, Paris. And we wanted to use that setting because Victorian is used a lot in these type of games, so we wanted to have a different game, a different background. Also, you pointed out steampunk… Yes, steampunk is also implemented in this game. But the general theme of this game is Pinocchio, and these are puppets. The city of Krat has been developed through the labour of the puppets that they made. But somehow, they’ve turned into slaughter puppets and they start killing people, and that’s how the city looks ruined and people are running away from the puppets. Also, for some reason, Pinocchio wakes up to a voice that he has to fight and find something. He is aware that he’s a puppet, but he doesn’t know why he has to fight and what he’s fighting for. So this is the theme of the story, and as you see in the title, the game is called Lies of P. So in this game, you as Pinocchio have to consistently decide if he has to lie or tell the truth, or trust this person or not. So depending on the decisions that Pinocchio makes, the endings will vary a lot, and there will be multiple endings.

How long would it take the average user to complete the game?

If you basically go through the game, it will take around 30 hours. But if you thoroughly check all of the contents that are hidden in the game, then it will be around 60 hours.

I’m the sort of person that likes to play games that are 10-15 hours long, so 30 hours can seem like a lot, whereas 60 hours can also seem like a lot. With this in mind, what steps have you taken to ensure that the game stays fresh for people that would like to play the game to completion? And at the same time, as the director who ultimately brings a lot of himself to this project, what steps did you take to remain creatively refreshed throughout the course of the game’s development, and also ensure that you didn’t get bored when you were working on the levels?

The game’s going to take 3 years to develop… But by the end, and if one were to look at the same thing again and again, those three years can get very boring. In order to ensure that the game stays fresh for you, how did you stay creatively refreshed throughout the entire development process so as to ensure that you’re able to look at the game in a fresh manner without necessarily getting bored of the entire creative process?

There’s been a number of Soulslike games, and in recent memory, there have been games like Mortal Shell, Thymesia, and Elden Ring. Given the increasing level of competition, and understanding the amount of stress that’s induced as a result of competition anxiety, what steps have you taken to ensure that the game is different enough from the rest of the competition? But also, and just for your benefit, what steps have you taken to ensure that you are able to deliver the game to the best of your ability without necessarily being overwhelmed by the level of competition that’s out there?

I don’t have any secrets in surviving the competitive genre of Soulslike games, but just by bringing out the best quality in our team will allow us to be different from all the other Soulslike games.

I don’t want to call the genre Soulslike because that term gives too much credit to a certain company, and it takes away from the achievements of other companies that aren’t called FromSoftware. But if we had to call them Soulslike games, what is your favourite Soulslike game?

Elden Ring… I studied and learned a lot from Elden Ring. Also, out of all the Soulslike series, I love Zelda the most. 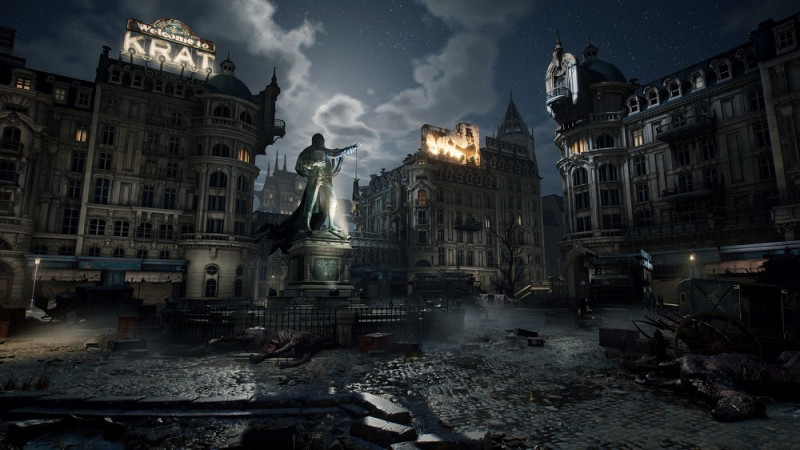 What is your background as a games developer?

I’ve been developing games for 15 years. I was on the MMORPG game called Lost Ark where I directed the combat system…

That combat experience shows, because I liked the combat in Lies Of P. I like the fast-paced combat of Bloodborne type games. But I’m also the sort of person that gets very bored very quickly, which is why I talked about playing games that are only around 10-15 hours long. With that being said however, how big is the development team for Lies of P?

So the hardest thing for me was developing this game as a console game, it was very hard. Because in Korea, the game market is mainly about mobile games, so it was hard to find someone who has experience in console games. So when we faced issues on making console games, we couldn’t find anyone who has experience or knowledge about the issue, so we had to crash course ourselves and learn and improve ourselves. That was the only way to get past the issues. That’s why we have spent so much unnecessary time and effort to solve this issue because we didn’t have anyone to help us. So we haven’t thought of being compared to the already big Western companies who already have big console games, but we’ve done our best, and we’re very honoured right now about the reaction that Lies of P is getting.

Is Round8 the development company, or is it Neowiz?

Neowiz is the game company and Round8 is the studio under Neowiz and there are two projects going on under Round8, and one of them is Team Nough, which is “enough” without the “E”. It means that we still are not enough; we’re still not satisfied with our resort. So the team name that I’m in is Team Nough.

Neowiz is the publisher… You’ll have to excuse my ignorance, and I say this with the utmost respect, but I’ve never heard of Neowiz, even though the publisher is now creating waves with Lies of P. A lot of this has to do with a lack of exposure, and maybe it’s my ignorance speaking here, but from my perspective, why do you think gamers haven’t heard of Neowiz enough in the past?

I myself am thinking that it’s a miracle to bring this game out into the world. So I don’t it’s so crazy that not many people know about Neowiz. Also, Neowiz is a Korean company and as I said, the Korean gaming market is not so well geared towards consoles, and is mainly around mobile. So that’s why it was kind of risky for them to approve this project, which is a console game. So the team is really appreciative of the company, and the company is also open to adventure and taking risks. For that, we wanted to compensate Neowiz, by bringing more popularity to Neowiz, and letting more people know about Neowiz. So that motivated the team to develop the game and make it better.

The game looks great and it plays great. I haven’t been on the internet long enough recently, but I’ve seen some people on a certain forum talk about it, so it’s obviously made waves with them. I know that the game is still a year away, so this is a bit of an unfair question, but are there any plans post-release for DLC or even a possible sequel?

So we spent a lot of time in putting the word out there for Lies of P, and we don’t want to waste it on just one game. We are planning an expanded pack or DLC. Also, there are so many attractive stories and characters behind and around Pinocchio, so we’re of course thinking about a series game after this one.

Mr. Choi… You’ve been in the industry for 15 years. What would you say is your proudest achievement in the 15 years that you’ve been part of this industry? And going forward, what else would you like to achieve?

Of all the achievements that I’ve had so far, right now, and with all the love and interest that I’m getting for Lies of P, this is the biggest moment for me as a developer. Also, my goal is for Korean fans or Korean gamers to meet their foreign friends and proudly say, “this is a Korean game, let’s play this”. We want to be a proud game company representing Korea.

This will be my last question and it goes back to the idea of Korean games. What do you think Korea as a nation, and also in terms of its game development culture, can do to enhance the reputation of the industry within Korea and also extend its awareness of games that it’s developing outside Korea?

I think they desperately need the mindset that a game project should start from the joy of the user, and not from the benefit that they would make from the game.