One of the major problems in rejuvenating old franchises is trying to determine as to how they can be made to appeal to modern day audiences. And with the original Arkanoid game being over 30 years old, it’ll be interesting to see as to how the classic block breaker game can be brought back with Arkanoid: Eternal Battle. Certainly, developer Pastagames and publisher Microids think that they’re up to the task, as they’ve implemented a new look, new rules, new effects, and also new features. But will these modernising attempts be enough to sway modern audiences? To find out, I spoke with Julien Herbert (Producer) about these challenges which his team has faced. Enjoy!

Given how Arkanoid has been gone for a while, what made you think that the franchise was ready for a revival?

This is an iconic franchise that we all loved and there is always a way to modernize old games like this one. And the main idea with Eternal Battle was to turn the Arkanoid formula into a battle royale game. So the main mode of the game is Eternal Battle, and this is where 25 people are trying to be the last man standing. So we adapted that to Arkanoid by changing the way we used to see the battle royale genre. Basically, it’s a points race, and to have more points you have to be quick and you have to be good. So it’s quite interesting because of what we added to the formula – the new rules, new peers, new kinds of bricks… The gameplay situations that you’re in can get really intense. Also, the music adds something because Arkanoid didn’t have any music at first. So we’ve added a very modern style music that changes during gameplay, so when things are intense, the music becomes even more intense, and it creates something that didn’t exist in the first game. I think it’s really interesting when you’re in the zone, and when you’re playing well.

The first Arkanoid game on Atari, that came out in 1986?

On the arcades, yes.

How many Arkanoid games have come out since the first one?

This is a difficult one… I don’t have the precise number, but I think there might have been 10-20 games on different platforms and at different times.

So there’s been 10-20 sequels after the original Arkanoid game that came out in 1986… The problem with sequels is that sometimes you could go too far away from the original formula, which is what made the game quintessentially that particular game, and which is what people loved about that particular game in the first place. In terms of this update and modernization of the original classic Arkanoid formula, what difficulties did you have in translating what is essentially a 30 year old formula to now? And at the same time, how do you think these old gameplay mechanics can be adapted and modernized to appeal to today’s audiences? What challenges did you have to ensure that not only did you respect the past, but that you also respected contemporary audiences – who might not necessarily appreciate what the “in” thing was 30 years ago, especially when taking into consideration the advances in technology… I mean, Arkanoid is basically a simple game that harks back to simple times, with the game running on simple hardware. Now we have games like The Last of Us which are all about graphics, AI, and all that jazz. Maybe it’s the case that modern day audiences have gotten so far away from what made Arkanoid such a memorable hit back then, which again makes me ask, how do you think a 30 year old game can appeal to modern-day audiences? And how do you update a 30 year old game and modernize it, whilst still respecting its legacy and its past?

Yeah, you’re right, this is a challenge when you do this kind of remake. Of course, the first thing you have to do is sit back and ask yourself as to what is an Arkanoid game? What makes an Arkanoid game an Arkanoid game? When you think about this, you think that maybe there isn’t a lot of stuff to do when changing the formula. But this game is over 30 years old, as you said, and many things have changed since. I would say that the main thing is that you can stay true to the spirit, and you can also stay true to the original gameplay, but you can tweak it, and try to add some new things whilst not changing everything. And this is why we’ve decided to add some rules, and change some rules a little bit, like adding more space walls, and also adding more challenges to the different levels that we’ve made. But I think the main thing would be the rhythm… When you’re playing this new instalment, you can really feel that it’s an Arkanoid game. You’re breaking bricks and you have the same sensation. It’s like this satisfying sensation of clearing a level. But we do it now with a much more different rhythm. And all these changes have come from all the feedback that we’ve had, in terms of sound and video, all the new stuff that we’ve added, and also the pace of the game. I think that’s what Arkanoid needed for a new instalment today, and this is what we’ve done. So we were very respectful of what Arkanoid is and we didn’t want to invent something that really doesn’t exist in the Arkanoid legacy. We wanted to change it by having very few differences, but you can still feel it as a whole, and I would say that the rhythm changes everything. Today, players want to be challenged, to challenge each other, and to be the best. So the Battle Royale mode was obviously something that we looked at immediately. Everything is true to the spirit of Arkanoid. 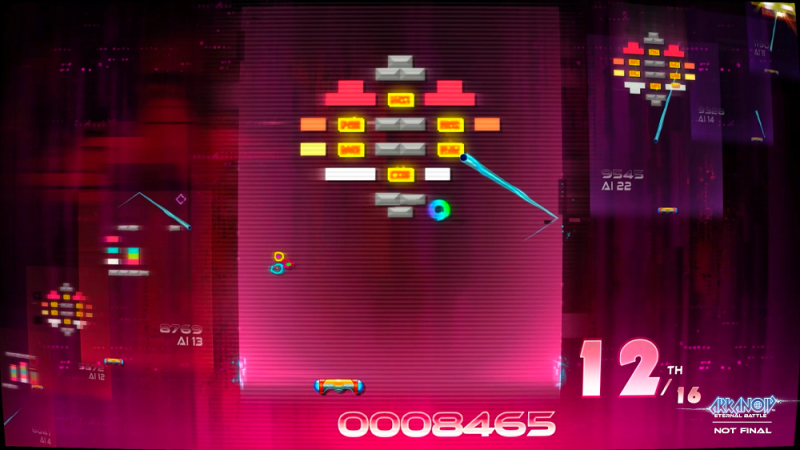 This is Taito’s IP, so we had the right to use it. And of course, during the whole process of development we were talking every day or every week with the IP owner and with different people at Taito, and they helped us a lot on different things about the lore of the game, because there is lore in this game. From the early stages of pre-production, and during all the production, and even now that we are nearly finished, we still talk with them and they share a lot of stuff about the legacy and about what we were talking about just before… What is an Arkanoid game? What has to be in an Arkanoid game? What sensation a player should feel when playing an Arkanoid game? They were also very keen on having the European way of doing things, in terms of graphics and gameplay ideas. So all the ideas that we’ve had, we’ve shared with them. We’ve had their feedback on which ideas are good, and which ideas should be done differently. So we’ve had many discussions with them and that was something really good for the game. We were going to go in one direction at one point and we decided to go in another one, because we had a discussion with them about what Arkanoid should be. So that was really instructive, and really good for us as developers to have their help. They helped us a lot.

Not the original developer, but someone at Taito who has been there for years and who has produced Arkanoid games before.