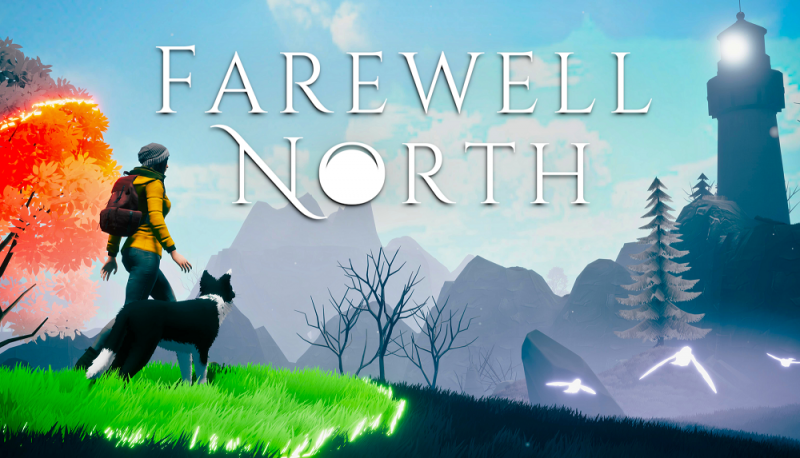 As the debut game from Kyle Banks, an Edinburgh based software engineer, Farewell North is an open world adventure game where you play as a border collie who accompanies his owner through the Scottish Highlands. As such, you’ll find yourself exploring a variety of environments (including land and sea), solving puzzles, and evading monsters. All whilst bringing colour back into the owner’s world, and charting an emotional story that examines as to what it means to say farewell.

With so many indie games vying for attention at this year’s Gamescom, Farewell North was able to grab my attention as a result of its unique art style, and because it reminded me of games like Journey and Abzu. At the same time, what intrigued me about Farewell North was the fact that it was only developed by one person. And so it got to be the case that I was able to sit down with Kyle Banks and speak to him about his game, and also discover as to how he was able to stay motivated in “Sunny” Scotland. Enjoy!

First question… Are you a one-man band?

Yeah. There’s a composer and some help on the publishing side, but for the most part it’s me.

This is probably a question that has been asked of you a million times, and it’s somewhat unfair. But how much of an influence did Spirit Of The North have on the game’s development?

Minimal, I’d say. I didn’t actually play it until after I’d started development, when I started getting a lot of comparisons. Farewell North, the name, has no relation to Spirit Of The North. It actually comes from a Scottish poet whose poem inspired the game. There’s obviously similarities, it’s set in the Northern climate.

Is it a good poem?

Yeah, I would say so. I enjoy it. I’m not really a poetry expert, but I enjoy it. There’s obviously similarities. You’re playing as a canine character in a Northern climate. But I think that’s pretty much where the similarities end. I think the games do stand separately.

For people that don’t know about Farewell North, how would you describe it as an elevator pitch to get people interested?

So it’s a game about restoring colour to the world. You play as a dog on a journey through the Highlands with your human companion. You’re helping her work through some grief and depression and some turmoil she’s gone through after a recent experience.

How long is the game?

How long did the game take you to develop?

It’s been about two years, and probably about a year left.

No, I have a full-time job, in addition to this.

So if you were to develop the game full-time, how long do you think it would take you?

I don’t think it would be drastically less. Sitting more hours at the computer wouldn’t necessarily make the game further along. It’s taken a long time to get feedback, to understand what the game even is. There’s a lot more than just man hours, I think, that goes into making it. It would obviously be helpful, but I don’t think it would be terribly far off in terms of schedule. 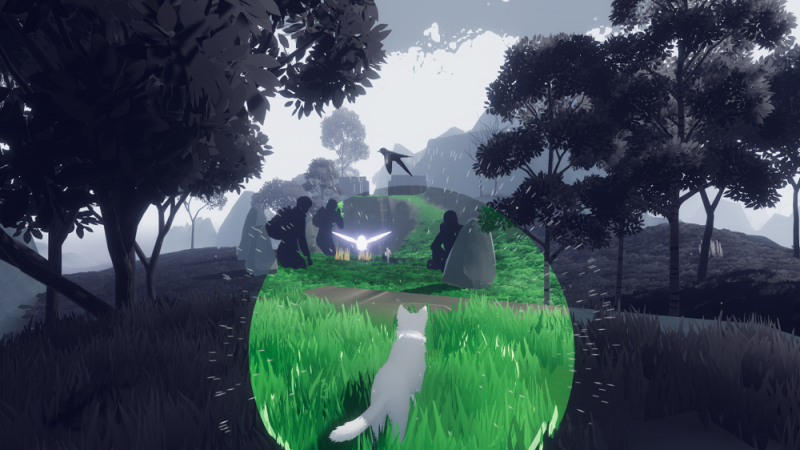 You seem like a fairly young person. What’s your development history as a games developer?

I’m a software engineer by day, so that’s where my background comes from. About 10 years ago after I graduated college and just started as a developer, I started just dabbling in games on the side, doing some little mobile games and stuff like that. Over the years, games have become more accessible, engines like Unity really took off and I just kept going with it. About 2 years ago when I started this, I started actually getting a good social media response to it, making YouTube videos and TikToks and all that. So that’s when it really kicked into full gear.

What engine is the game developed in?

What are the pros and cons of Unity for someone like yourself, who’s making the game in Unity? Why did you pick that engine, and at the same time, what can other aspiring game developers learn from your example when it comes to wanting to pick an engine for their particular game? And why do you think Unity will help them?

I wouldn’t say that I’m necessarily a massive fan of Unity. I think Unity, Unreal, Godot are all amazing tools, the best tools we’ve ever had. I think what’s more important is just picking one and mastering it. Because it’s going to take you years to really do that. But whether that’s Unreal or Unity or Godot, you’re going to be fine, in any case, they’re the best tools that have ever existed to make games. Unity, specifically, the reason I chose it was just at the time, about six years ago, Unreal had a more expensive licensing model. So I just went with Unity because it was free. Free for non-release games anyways, and I just stuck with it. But if you’re starting today, pick Unreal, pick Godot… They’re all amazing.

You’re at Gamescom, and there’s a lot of games here in a confined space. What difficulties have you had in coming to Gamescom, and how hard has it been for your game to be noticed in an arena that’s full of games?

Which is what I did…

Yeah [laughs]. But there’s so many people passing through, and obviously not everyone’s going to be a good candidate for the game. It’s a specific atmosphere type of game. It’s not for everybody. It’s not very actiony, it’s very casual. I think it’s just about trying to evoke an emotional response as someone’s walking by, and hopefully, it resonates with them and they’re interested to find out more. 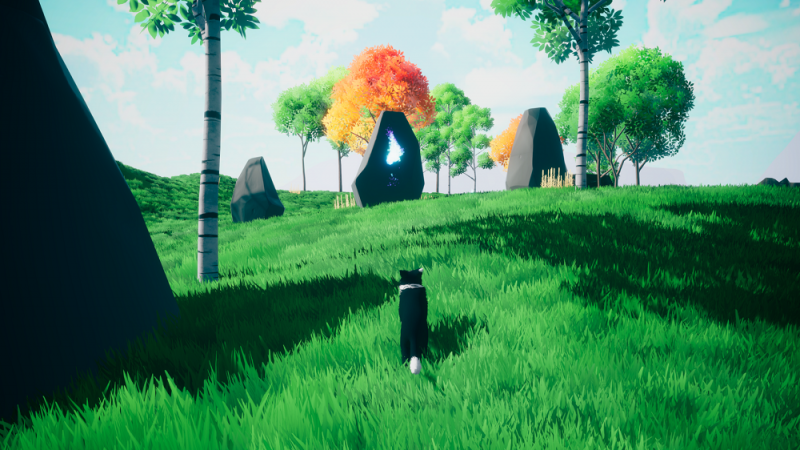 When’s the game out?

What platforms is the game coming out on?

We’re a hundred percent PC and Mac, and then we’re also exploring different consoles, but we haven’t confirmed anything yet.

For me? I don’t know, what do people normally say in this [laughs]?

I don’t normally ask that question…

I would just say check out Farewell North. You can find it on Steam. If you’re into casual games, adventure games, and emotional games, check it out.

That’s what I was going to ask… What inspired you to make Farewell North?

The whole mental health aspect and stuff was inspired by my own, and people in my family’s experience with that. It’s also really about the relationship between a person and their dog, that’s really the core focus of the game. I’ve always had dogs; I love dogs and I love the relationship we have with them. I think it’s very unique and I just thought it’d be something that’d be interesting to explore in the game.

I think it was the opposite. I think you have more free time. You’re not going out with friends, you’re not partying, or any of that kind of stuff. Not that I’m a big partier to begin with, but just having more free time to dive into it, I think has been really beneficial for personal game development. As a whole, it does mean that there’s more games coming out, more games that have been in development, more games that are trying to get people’s attention. So I think we’re going to see a big spike over the next couple of years in terms of the number of games that are coming out, which is obviously more competition. 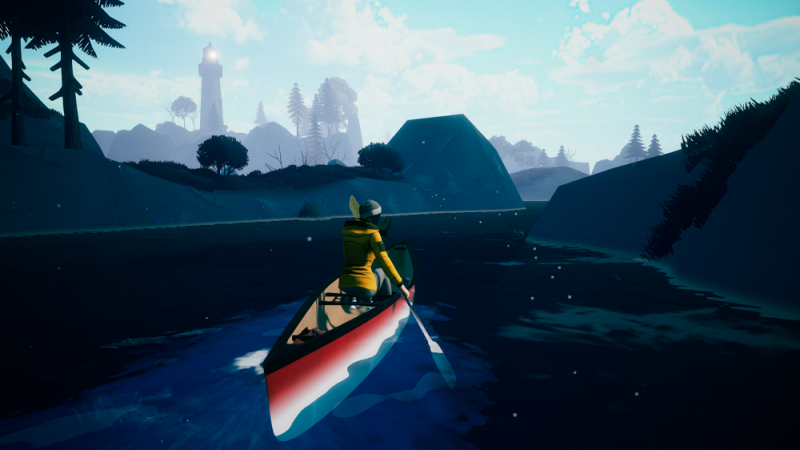 There’s something like 200 games being released every day on Steam.

I did not know that.

Yeah. It’s kind of an intimidating statistic for a developer, right? 200 games every day, that are trying to get people’s attention. And they’re not all going to.

Do you sometimes wake up in the morning… wanting some breakfast… and then just wonder, “man, what am I doing”? The competition’s so fierce that sometimes people have competition anxiety. Obviously, that’s what distinguishes the go-getters versus say somebody else who might crumble under the pressure…

Especially over such a long period of time, how have you stayed motivated… Like, even here? Fair enough, I’m interviewing you because I’m interested in the game, but you might have had, and I haven’t asked this and I’m not going to ask this as such, but I’m going to infer it, where you’ve probably had a whole bunch of people walking past and where you might have heard people. Because I didn’t know that you were the developer that I was supposed to meet until you said, “hey, is your name blah blah? Or, are you from blah blah 101”? But you could have had a whole bunch of people going, “oh, that game looks shit”, and they would have just carried on. So that can be quite demoralizing in itself, where they say whatever they want to say, and they have all these opinions. But they don’t necessarily know that these opinions can get back to the main creator who happens to be within earshot of them. So for every single person that does take an interest in the game, and obviously one of those people happens to be standing in front of you, there are probably something like 200 other people who walked past and just said, “yeah, that game looks shit. You can’t shoot anyone in the face”.

It’s the same in Scotland, where it’s just dreary every single day. I watched ‘Trainspotting’ and… what was the guy’s name again? Ewan McGregor, that’s it. He’s like, “who’d want to come to Scotland, this place is a shithole”.

Maybe I’m a glutton for punishment.

It’s like you just wake up and you stare outside and it’s just cloudy and grim and drizzly and you’re like, “man, what am I doing with my life”?

Yeah. Of course, there’s a hundred thousand people that are coming this week to Gamescom and you’re hoping that 0.1% of them are going to be interested in your game.

I think the only way to become motivated is intrinsically, but also putting motivation to the side and focusing more on discipline. You’re not going to have 100% days where you feel motivated. No matter what you’re doing, whether it’s developing a game or playing a sport, some days you’re just not going to feel like doing it. But I think that’s where discipline becomes more important than motivation. Motivation, I think gets you the first 10%, the rest is all about discipline. In terms of this, you’re absolutely right, people will walk by and make offhanded remarks, not realizing you’re standing right there and that sucks. But for me, personally, I’ve been making YouTube videos for a long time, and I’m used to arrogant comments from time to time, from people who know that you’re going to see it and still want to say that stuff. So just developing a bit of a thick skin about it. It’s not going to be for everyone, I didn’t make it for everyone. If you like it, that’s amazing, but if you don’t, there’s so many different games out here, so you’re going to find something else that you like.

Kyle Banks, thank you so much.