Created independently by a small team of talented developers who have no interest in partnering up with a publisher, Selaco was originally conceived by Wesley de Waart who has built his Altered Orbit Studios around the project, and who is the Lead Developer on the game. With a development cycle spanning over five years, Selaco is being developed on a modernized Doom engine (GZDoom) that “draws inspiration heavily from F.E.A.R. in terms of action set pieces, while mixing traditional retro-FPS elements from QUAKE and DOOM, along with some more modern features.” At the same time, even though critics of the project would argue that GZDoom isn’t very capable, Selaco definitely shows that the engine has a lot of untapped potential – with Solace Dreams and Total Chaos also proving to be excellent examples of what can be achieved by people.

Designed to run on low-end machines, Wesley de Waart and his team have spent a lot of time in optimising performance, and regularly use old laptops to test the game. At the same time, Selaco is designed in such a way where all of the effects can be disabled, and where all the levels are segmented into smaller chunks so as to keep performance high. With that said however, Selaco is touting a number of features that will allow the game to punch well above its Doom mod status, and these are listed below:

– A lengthy story-driven campaign entirely seen from Dawn’s perspective.
– A world that puts an heavy emphasis on character, charm and lore.
– Intense action-set pieces with fleshed out destructibility.
– Cohesive AI that coordinates with each other in order to take you down.
– Full soundtrack with an emphasis on synths and electric guitar.
– Professional Voice acting.
– Extra gamemodes for enhanced replayability.

Even though the demo is scheduled to arrive this year, the full game won’t be released until 2255. With that said however, it’s nice to know that FPS-centric Youtubers (like GGmanLives) have been earnestly raving about the game. In the meantime however, if you like what you see, you can help support the project by heading over to Selaco‘s Patreon page.

Tell us a little bit about Altered Orbit Studios. How did the company come about, and what is its development history?

AOS was slowly built over time. Originally, it was just me and a friend (who is a brilliant writer) that I essentially had to bribe into doing game development. But eventually, we’ve met a lot of talented individuals from all over the world with all sorts of experiences, who enjoy the project very much. And we’re working together to make our very first game – Selaco.

How long has Selaco been in development for, and how big is the core development team? What are their industry credentials as far as FPS games are concerned, and what steps did you take in recruiting talent of their calibre?

Selaco has been in development since… honestly… kind of forever. Ever since I was a child, I’ve just loved space, the extreme vastness and the unknown of it. It’s both frightening and intriguing. And I always wanted to make a tribute to space where I would be able to use entire pencils in shading the paper black, and I would pretend that the small white spots I missed were distant, unexplored stars.

Selaco is very much like one of those papers, but I have become very ambitious with my ‘shading methods’. The rest of the team very much shares this vision. The programmers, artists, composers, writers… we’ve all worked on various mods, games, and game engines, and all of that was merely training for our magnum opus. Finding like-minded visionaries wasn’t easy, but I’ve been very active in various communities over the years, so every now and then, I’d just stumble upon someone who ‘clicks’ with my vision, and we both get a glint in our eyes – a spark saying that we’re perfect for this project.

What was the reasoning for you to use the GZDoom engine as opposed to something more “modern” (like Unity or Unreal)? What benefits has this allowed you to have, and have there been any major trade-offs whilst making Selaco?

Selaco was initially intended to be a Doom mod, but at one point, we realised that we’d put too much of our blood, sweat, tears, and soul into this project, and it has ascended beyond its mod status. So we decided to put even more of our blood, sweat, tears, and soul into it in order to fully grow it into its own (unique) beautiful game that can stand on its own two healthy feet. Moving to a different engine would have set us back, because we’d have had to re-do our assets in order to accommodate for the new engine. And despite all the hard work, we didn’t have any guarantee that we could achieve the same beauty that have made people fall in love with the project, and what we’d already achieved on GZDoom.

Remaining on GZDoom also allows us the same degree of mod-ability that Doom is known for. Someone else can start their own Selaco mod, but when they fall too much in love with their project, they can also go standalone – and the cycle repeats. 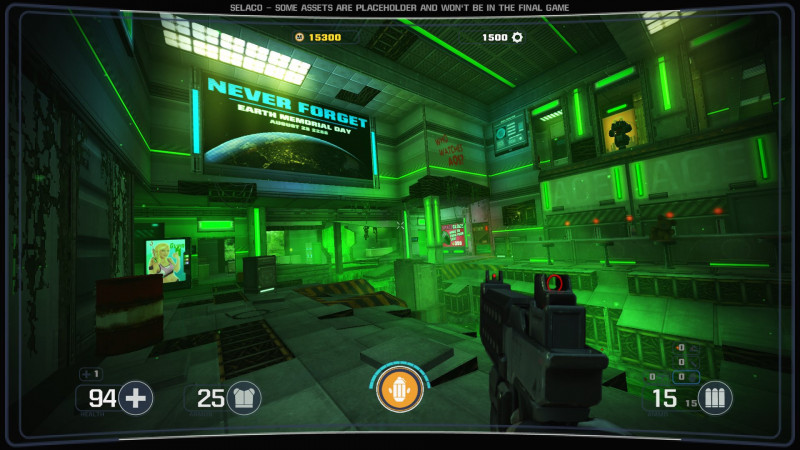 Despite GZDoom essentially being an upgraded version of the iD Tech 1 engine (which allowed for the creation of Ultimate Doom and Doom 2), Selaco looks to be so much better than what people thought possible on GZDoom. What steps did you take in making Selaco look so much better than your average run of the mill 90’s inspired retro shooter, and how come we haven’t seen more GZDoom created games that are of Selaco‘s calibre? What tips would you give to developers who want to follow in your footsteps and get more performance out of the GZDoom engine?

People are not using GZDoom to its full potential, and they’re using it inefficiently. For mods which aim to expand the original game, that’s fine. But once we get into the territory of new games, people are less forgiving, and one has to start paying a lot more attention.

It’s like bringing a friend and a girlfriend home for the first time. They both have their own flaws, but your parents react differently. When you bring a friend home, and they’re a bit annoying – whatever, it’s a friend. Nobody cares as long as they’re nice. A girlfriend does not enjoy the same privilege, because you might spend the rest of your life with them – day after day. Now your parents are much more forward about their shortcomings, because it’s a big decision.

So my advice for other developers is to study the documentation and dig into the code examples. Aside from being amazing restroom reading material, you will learn about various features that you didn’t know were there. And don’t be afraid to replace old code that you have with new features that you’ve discovered, because chances are that it’ll be faster. Selaco would not be possible without ZScript. ZScript is the holy lord and the saviour that GZDoom needed.

What would you say have been the biggest difficulties that you’ve encountered whilst developing Selaco and how have you overcome these challenges?

Graf Zahl and Twitter’s video compression algorithm. The way to overcome these is to keep the framerate of your video up to 40 FPS, because above 40 fps is when the trouble starts.

The market’s currently undergoing a bit of a retro shooter renaissance at the moment. What would you say are your favourite retro shooters that have been released in recent memory?

A lot of people disagree with me on this one, but I claim that Brigand: Oaxaca is a retro shooter. And that’s definitely the best one out of recent games. It tries to branch out a bit by providing dialogue prompts and what appear to be quests. But ultimately, the game is mainly about shooting guns at raging enemies, and it does that very nicely.

What’s your favourite FPS game and why?

It’s definitely a very tough choice to pick just one. There are various different aspects I enjoy in all FPS games. They are all interesting in their own way, and no matter which game I choose, I feel bad about not choosing some other one. But I did my best to narrow the selection to just one, and it has to be Kingpin: Life of Crime. The atmosphere of the game, the pure Kingpin vibes, have yet to be matched by any other game.

Finally, what are the chances that Selaco will be getting released before 2255, and will the game be heading to consoles?

The common wisdom in game development is: “Imagine what you can do in a year. That will take years to make”. And another one for software development is: “What takes 1 developer to do in one month, takes 2 developers 2 months”. So taking that mantra, and tallying it with everything that we want to do, resulted in the year 2255. That has proven to be somewhat pessimistic, and if everything goes well, we might be done somewhat sooner, but it’s really too early to say at this point. Hopefully, the medical field progresses enough for me to see the game’s release. Cryogenics seems like an interesting option, but there are very inconclusive results so far, so I’m keeping my options open. I’m young enough to be able to afford that.

What I can confidently say is that the game will not be out on consoles. The engine’s source code is licensed under the GNU General Public License, which prohibits any part of the code, including those which our code just casually interacts with in passing, is closed source and is unavailable to the general public (which console SDKs usually are). It’s not impossible to release the game on consoles, but very highly unlikely. Much like the success-rate of cranial-only cryogenics unfortunately.